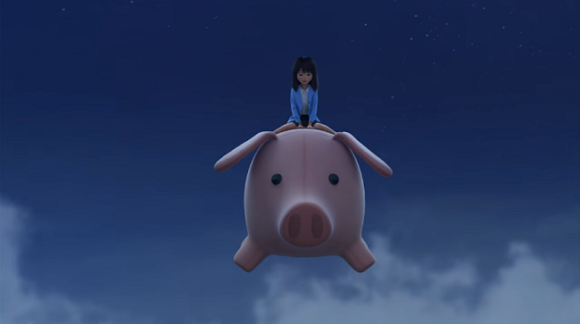 There are millions of people living in Tokyo, and most of them moved from somewhere else to Tokyo in order to find work in the gigantic city. Among these millions is a large number of people who choose to live on their own in a tiny apartment so as to avoid the long commute, so we’re sure many share very similar experiences as what is depicted in this quirky short film titled ‘Tokyo Cosmo’.

Created by Takuya Okada, this short movie starts off with a normal “end of the day” scene that we imagine any officer worker in Tokyo would recognize, but it soon turns into a magical journey through a runaway imagination. The film was entered in the 17th DigiCon6 ASIA Supreme Short Movie Contest and has captured a ton of popularity for its animation style, which many say is reminiscent of a Pixar movie.

The dream-like sequences depicted in Tokyo Cosmo are probably a product of a worker’s incredibly tired mind, since we all know how long the average office worker’s day is. Still, it’s a treat to see the crazy adventures that play out in our mind animated in such an exciting way! The 17thDigiCon6 ASIA Supreme Short Movie Contest is being run by TBS in Japan and this particular short film is an audience choice entry. Voting ends on November 6, so if you enjoyed watching it, make sure you give it your support for Tokyo Cosmo on their voting page (click the pink box).