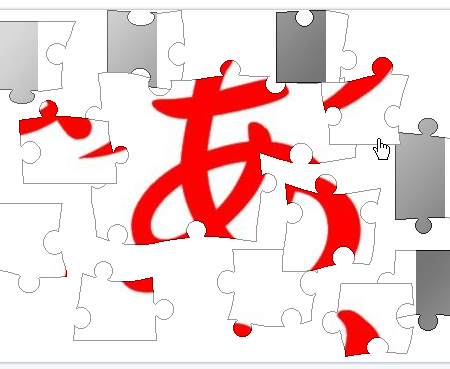 Learning hiragana can be quite a daunting task for new learners of Japanese, as the idea of writing in syllables, using what amounts to unfamiliar ‘squiggles’ that are the hiragana characters can be a very different experience than using a letter-based alphabet like English. The great thing about learning hiragana though is the fact that no matter what, they are always pronounced the same way, allowing for hiragana games to be made, like the ones below.

These hiragana games are made to be played on a computer, within your browser without the need for downloads. There are far better quality games available as apps on devices such as the Apple Ipad, or Android devices.

Here are some hiragana games to help with studying hiragana.

First up is one of my favourite hiragana games, ‘Kana Invaders’. The game is based on the classic space invaders game, where you are a gun trying to shoot down invading aliens. Except this time you have to type in the correct ‘romaji’ or English version of the hiragana falling down the screen. The game is adaptable for your knowledge of hiragana having 20 levels. The game can also be used to practice katakana also.

Kanagrams is again something you can use to practice both hiragana and katakana, and again you can adjust the game to your level by selecting the desired hiragana or katakana to practice. Then it gives you 3 different game styles to use. The first ‘text boxer’ is a simple ‘matching text game’ where the hiragana needs to be typed using English letters next to the hiragana that pops up. The second game called ‘quickclick’ is a little more interesting where you need to click the correct English letters that match to the shown hiragana character, and it’s set to a very quick time limit. The third game called ‘connector’ requires you to draw a line with your mouse from a hiragana character to the correct English version.