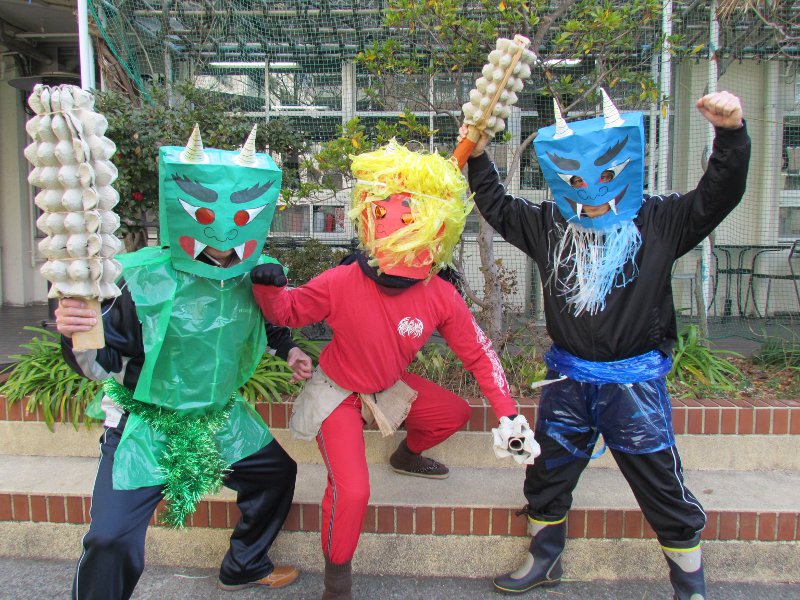 Setsubun is the day before the beginning of Spring in Japan, traditionally the 3rd of February. The name literally means “seasonal division”, but usually the term refers to the Spring Setsubun. In its association with the Lunar New Year, often referred to as the start of the Chinese New Year Spring Setsubun can be and was previously thought of as a sort of New Year’s Eve, and so was accompanied by a special ritual to cleanse away all the evil of the former year and drive away disease-bringing evil spirits for the year to come. This special ritual is called mamemaki (literally “bean scattering”).

Setsubun bean throwing is usually performed by the toshiotoko of the household (the male who was born on the corresponding animal year on the Chinese zodiac), or else the male head of the household. Roasted soybeans (called “fortune beans” (fuku mame)) are thrown either out the door or at a member of the family wearing an Oni (demon or ogre) mask, while the people say “Demons out! Luck in!” (Oni wa soto! Fuku wa uchi!) and slam the door.

People will often scatter beans, at their home but many people will attend a shrine or temple’s Spring festival where this is done. The beans are thought to drive away the evil spirits that bring misfortune with them. Then, as part of bringing luck in, it is customary to eat roasted soybeans, one for each year of one’s life, so if you’re 10, you’d eat 10 soybeans. Here’s a video of a Setsubun procession where the oni are blessing passers by near a shrine.

The custom is quite common in family households where the father generally dresses up as an oni and tries to scare the children inside. The oni costumes are supposed to be scary, but most modern families simply use a cardboard cutout mask, however in some remote villiages in the north of Japan, the idea of getting a visit from an oni can be quite scary as the city council pays for actors to dress up and visit children’s homes trying to scare the children. The following video is a very modern take of the setsubun tradition, made as a Japanese advert for soy-based snacks it features some very not traditional oni, but still includes the throwing of soybeans at them.