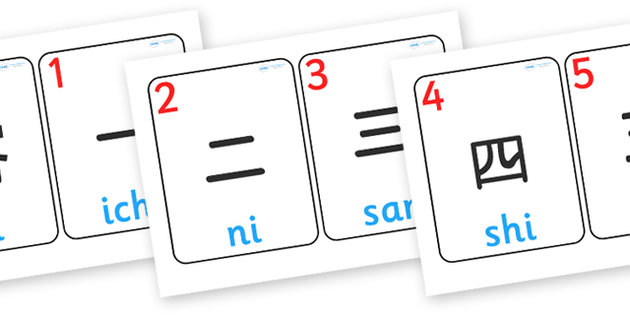 Japanese has numerous different ways to count, but the most commonly taught in primary school Japanese classes are the Japanese pronunciations of Chinese numbers. Two sets of pronunciations for the Chinese numbers exist in Japanese: one is based on Sino-Japanese (on’yomi) readings of the Chinese characters and the other is based on the Japanese yamato kotoba (native words, kun’yomi readings).

The most typical way to teach Japanese numbers to young children is using the ‘on’yomi’ way of reading numbers.

A fantastic video resource I use to teach the ‘on’ readings of the Japanese numbers is below. It’s made by GenkiJapan.net who has a number of very useful different videos made to teach simple Japanese.

Now for a bit of fun. It’s quite common when being presented with this adding of words to make larger number that students assume that 20 would be 10+10 or JyuuJyuu, but if that were to be the case, 100 would be JyuuJyuuJyuuJyuuJyuuJyuuJyuuJyuuJyuuJyuu! quite silly isn’t it? Here is a Japanese game show where an English teacher is attempting to count to 100 in English, but doesn’t know English very well, instead he calls 20 tenten! or 10+10. The students aren’t allowed to laugh, so they get smacked on the bottom.

Students learning Japanese numbers going beyond 99 need to learn a few new words, outlined below. Just like in English, Japanese has unique words for 100, 1000 and unlike English, 10,000.