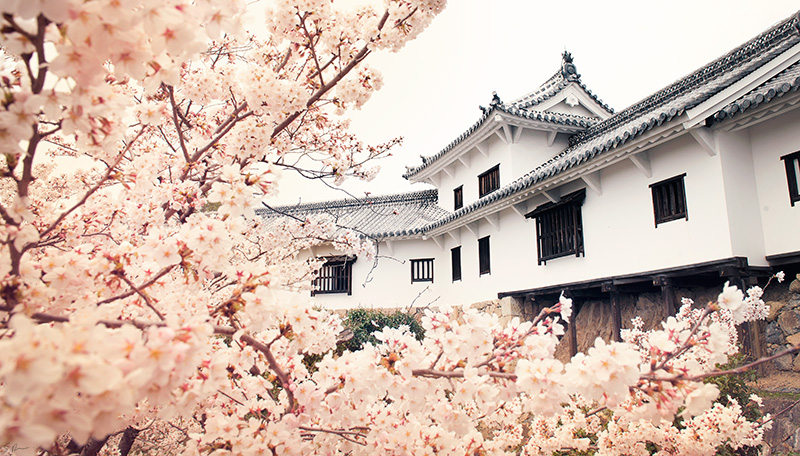 A restoration project for the main keep of Himeji Castle began in in October 2009 and has only just been reopened in June this year. The Himeji Castle reopening is scheduled for March 27.

The so-called “Heisei (Japanese traditional era name) Restoration”–which took place 45 years after the Showa Restoration in 1964– took around four years, during which time the main keep of Himeji Castle was entirely covered in scaffolding. The Himeji Castle reopening showcases it’s new coat of dazzling white plaster. The castle is known as the ‘White Heron Castle’ due to it’s colour.

The restoration work was concentrated on white plaster reapplication, roof replacement and earthquake proofing. Compared to the previous major restoration in 1964, in which buildings were dismantled for repairs, this restoration is considered small in scale. Nevertheless, the restoration work for the largest tourism resource in Himeji City was strategically planned to maintain tourism revenue and preserve cultural assets. When I visited the Castle in 2012, the main keep was covered in a huge scaffolding with an image of the keep printed on it, as you can see in the image above.

Himeji City estimates that the number of Himeji castle reopening visitors will reach 1.9 million. In 2009, the number of castle visitors exceeded 1.56 million, before the restoration work commenced. While the maximum capacity of visitors to the castle’s main keep and other attractions is said to be approximately 7,000 persons, 20,000 persons visited the castle per day immediately before the initiation of construction in 2009.

Himeji Castle is a hilltop Japanese castle complex located in Himeji, in Hyōgo Prefecture, Japan. The castle is regarded as the finest surviving example of prototypical Japanese castle architecture, comprising a network of 83 buildings with advanced defensive systems from the feudal period. The castle is frequently known as Hakuro-jō (“White Egret Castle”) or Shirasagi-jō (“White Heron Castle”) because of its brilliant white exterior and supposed resemblance to a bird taking flight.

Himeji Castle is the largest and most visited castle in Japan, and it was registered in 1993 as one of the first UNESCO World Heritage Sites in the country. The area within the middle moat of the castle complex is a designated Special Historic Site and five structures of the castle are also designated National Treasures. Along with Matsumoto Castle and Kumamoto Castle, Himeji Castle is considered one of Japan’s three premier castles, which makes the Himeji Castle reopening event such a desirable tourist attraction for the city.

Himeji city just happens to be a sister city for Adelaide , whereby the two cities share a things like intercultural exchange opportunities and is intended to foster friendship and understanding between different cultures as an act of peace and reconciliation, and to encourage trade and tourism. An obvious example of this sister city exchange is found in the Adelaide Himeji Gardens, a Japanese-style garden gifted to Adelaide by the city of Himeji.