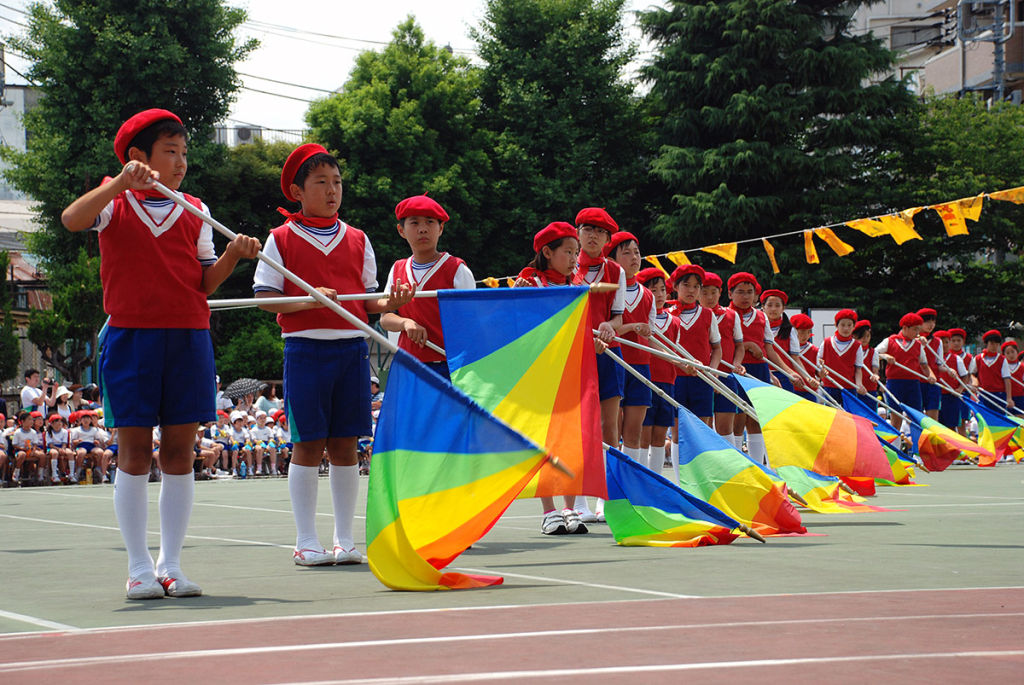 Much like in Australia, Japanese schools hold an annual sports day, or undokai. The undokai is a huge event on the school calendar as students will prepare for the events during school and after school in their club activities. Japanese sports days tend to be highly structured affairs with a strict order of events carefully designed to showcase each individual classes’ physical progress. When talking about primary school, the year 6’s (the final year of primary school in Japan) will put on a show of quite impressive acrobatic feats for 12 year olds. The younger children will do dances or other culturally-relevant activities interspersed within the usual running and relay races one usually sees at sports days. However there are a few events unique to the Japanese undokai, and I’d like to share them with you.

Generally at an undokai there will only be two teams, red and white, representing the colours on the Japanese flag. Only in very large schools will there be more than these two colours, and unlike in Australian schools where students stay in one team for life, japanese students may swap their team each year.

As I mentioned above, the year 6 classes will put on an impressive display of acrobatics. The schools I taught at (Around 8 different schools across Japan) all did this and it’s quite impressive. We would not be able to do this in Australia due to safety concerns.

The oodama event is a popular source of fun as often children competing in relay races using the giant balls are run over, which can be amusing. At first I thought it was quite scary, but later I was informed that the Japanese believe that ‘if you’re not getting hurt you’re not having fun’ which I can understand the sentiment. One needs to step out of their comfort zone to find new things, or indeed get better at something, so children getting hurt is kind of needed at a setting like undokai.

This particular game I saw played two ways, one was a simple relay race between two points, the other was using the entire school to pass the ball over them. The team to complete the lap of the school was the winner.

Another game we could not play in Australia due to safety concerns was samurai fights, whereby two or three students pick up an another student and act like that student’s horse. They then rush into ‘battle’ with the opposing team trying to either dismount the other team’s samurai, or steal their helmet. Playing this game in the concrete yards common in japanese schools can be the cause of a few injuries, but is loads of fun.

Perhaps the one thing that takes the most practice out of all the events is the marching band, often accompanied by a fully fledged brass band. Year 5/6 students will spend hours perfecting their routine to march and play their instrument during their undokai.

In Between the usual sporty events such as running races, relays and games like tug of war, there are also displays of dancing and other such cultural activities put on by individual classes for the entertainment of the crowd. This is what the majority of students will be practicing before their sports day as they know that their family will be watching and being out of step with the rest of their class can be quite embarrassing.

Possibly my favourite game I saw at primary school undokai in Japan was otedama. Again, there were two ways to play the game that I witnessed while living there, the first where each team have dozens of small beanbags and a set time in order to throw them into a tied off net. The most in the net wins. And another where the teachers (principals in this case) wear the baskets on their backs and have students throw the bean bags into the baskets on their backs. Often students will just take the opportunity to throw a bean bag at their principal 🙂

To really get an idea of what an undokai looks like though, you’d have to either visit Japan and goto one, or watch the 90 minute footage of one I found on youtube below.

All the photographs were taken by me (Steven Duncan) while living and working in japan as an English teacher.