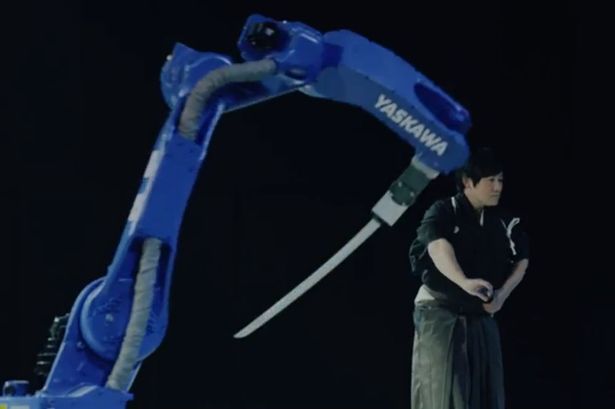 Japan’s Yaskawa Electric Corporation (YEC) has recently put on a promotional show with their new Motoman-MH24, an industrial robot that slices and dices with human-like precision. In real world applications, the MH24 would more likely be assembling and packing products, or helping with medical procedures, rather than being the deadly samurai robot portrayed in this video.

When combined with the precision sword fighting techniques of Japanese master swordsman and five-time world record holder Isao Machii, the MH24 is capable of wielding a katana in such a fashion that can demonstrate it’s human-like touch and finesse. Very much like a samurai robot.

Machii’s moves were 3D scanned and analyzed by the team at YEC, who then programmed them into the MH24. They didn’t battle each other, but rather competed by performing a number of challenges side by side.

As YEC points out,

What makes this demonstration so impressive was the apparent ease the robot can mimic the movements of a highly acclaimed martial arts expert and duplicate feats that would usually take years of training to achieve.

Katakana wielding samurai robots are however not a new thing to come out of Japan, but this is one of the first times one has been used to demonstrate their ability in a real world test. Other demonstrations like the one below more shows the samurai robot’s ability to show ultimate precision whilst working with other robots.